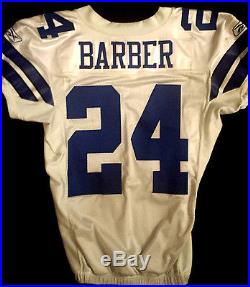 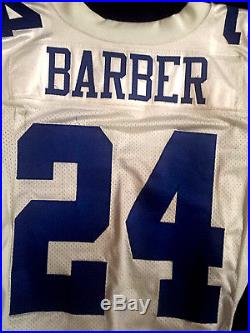 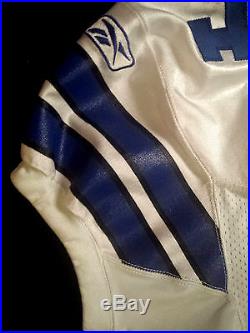 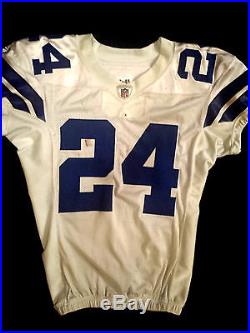 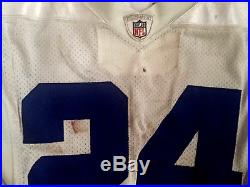 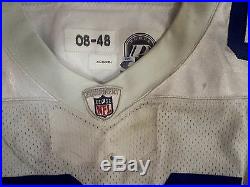 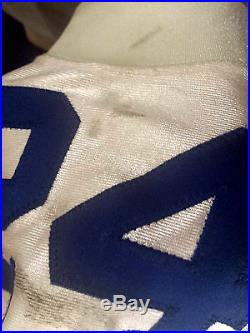 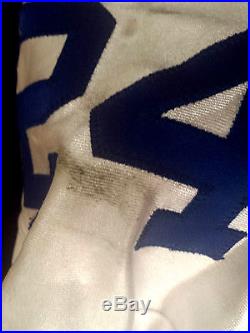 NFL / DALLAS COWBOYS. This is for a GAME WORN jersey of former Dallas Cowboys player Marion Barber #24. Reebok branded, made in Berlin, WI. This is a siz e 48 (similar to a M). Label marking: 07 (made in 2007). Th e 2007 date is not an absolute indicator to when this was issued or worn and it could have been issued or worn anytime after that year (assuming no changes were made to the team’s uniform). This jersey comes with the customized c inch ed sleeves and shortened torso length that many players often prefer. The shortened jersey length is a team customization that has the jersey cut just below the waist then neatl y. Hemmed with an elastic band sewn in to keep the jersey neatly and securely in place. This also has the unique “Dallas Cowboys” customization of a small reinforced section on the front. (above the front numbers) with a small hole for the players to secure the jersey to their shoulder pads. Most Certainly Game Worn! Not just game issued, but without a doubt Game WORN. While our pics may not be totally telling, in person, this glorious jersey has evidence of eye-black and blood (no doubt from one, or many, of The Barbarian’s would-be slayers). This jersey could have been worn during the 2008 or 2009 season. I rule out 2010 only because it has no 50th Anniversary patch (that the’Boys chose to observe on their 51st year). I will continue to browse Barber pics from 2008-09 to see if I come up with a bloody match and add the pic if I come across it. These are the genuine NFL jerseys that the players actually wear in games. Made in Berlin, WI. These were never intended for sale as merchandise, but for player use. What’s the difference between a game jersey and other types? These feature full sewn on numbers and names and much heavier duty stitching than jerseys for the general public. Also because this jersey is specifically fitted for the player, they will fit a little tighter than ones you are used to at the Pro Shops. Although these jerseys are fitted to allow for the player’s specific padding, they otherwise want their jerseys to fit tight, so as the opponent cannot grab or pulled them down by the jersey. What is the difference between “game issued” and “game worn” jerseys? Game issued jerseys are jerseys issued to the players that have the specific modifications i. Cutting / jersey trimming, custom options that a player may want before wearing it in a game. Is that “game worn” is actually used in a game. Obviously “game worn” will commonly have tears, repairs, and stains (sweat & even blood). Since “game issued” were probably never worn in an actual NFL game, they often will appear as new. What do the numbers on the inside collar mean? The first number is the year the jersey was made. The second number is the size. It is common that a jersey made in one year isn’t issued until the following years, so don’t be concerned to see a 2010 jersey made for a player that didn’t join until 2011. It is fairly common. Why do they seem to come in different sizes for the same player? Players request what sizes they wish to have their jerseys in and then request size options for weather, extra padding i. Like rib protection, etc. We were told Tony Romo had jerseys available in almost all different sizes just to have options. How did you obtain this? These have become surplus because Reebok is no longer the provider of NFL equipment as Nike took over after the 2011 season. Therefore all the Reebok items are no longer used by the team. We have (and will have much) more similar NFL / Dallas Cowboys related listings in the future. NFL / Dallas Cowboys. Highly underrated but loved by teammates, coaches and fans alike, the Barbarian was a absolute monster to bring down. Some of of his runs are legendary like the 2007 Patriot game at Texas Stadium. Beginning as a backup to Julius Jones, Barber found his niche as a third-down rusher and a closer of games. He emerged as an excellent red-zone running. Back, leading the NFC with 14 rushing touchdowns in 2006. He was the first non-placekicker since 2000, to lead the Cowboys in scoring (96 points). He also displayed his ability as a power back, gaining a reputation for punishing defenders. Jim Johnson, the Philadelphia Eagles defensive coordinator, called Barber the hardest running back in the NFL to bring down. During the 2007 season, Barber’s power running back style earned him the nickname Marion the Barbarian and he was the league leader in breaking tackles, reflecting his personal mantra of hit or get hit. Barber rushed for 975 yards on 204 carries and 10 rushing touchdowns with a 4.8 yards-per-carry rushing average. On December 18, 2007, he was named to his first Pro Bowl despite officially being a backup. Dallas offered Barber, now as an unquestionable starter and one of the premier running backs in the NFL, the highest tender as a restricted free agent. Thank you for viewing our items. Since 1994 we have offered all manner of collectibles, but we specialize in vinyl LP records. Powered by SixBit’s eCommerce Solution. The item “Marion Barber Authentic NFL Game WORN Issued Jersey Size 48 Dallas Cowboys” is in sale since Thursday, May 26, 2016. This item is in the category “Clothing, Shoes & Accessories\Men’s Clothing\Athletic Apparel”. The seller is “music-baron” and is located in Irving, Texas. This item can be shipped to United States, Canada, United Kingdom, Denmark, Romania, Slovakia, Bulgaria, Czech republic, Finland, Hungary, Latvia, Lithuania, Malta, Estonia, Australia, Greece, Portugal, Cyprus, Slovenia, Japan, Sweden, South Korea, Belgium, France, Ireland, Netherlands, Poland, Spain, Italy, Germany, Austria, Russian federation, New Zealand, Switzerland, Norway, Ukraine, Croatia, Guernsey, Gibraltar, Iceland, Jersey, Liechtenstein, Luxembourg, Monaco.