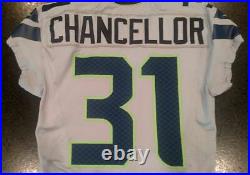 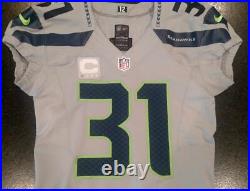 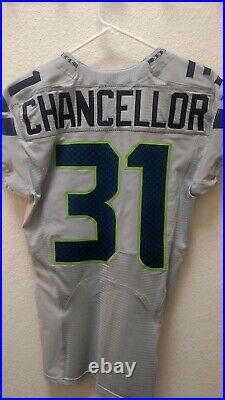 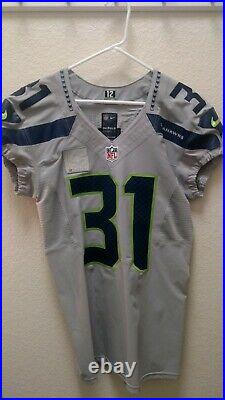 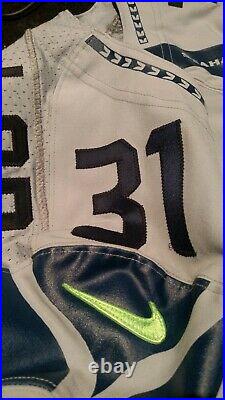 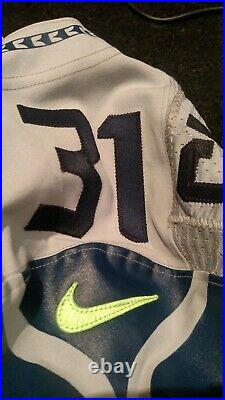 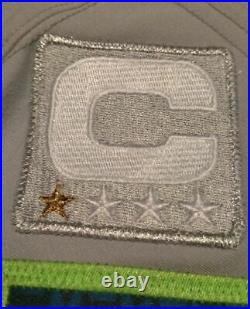 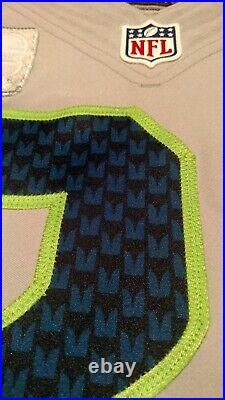 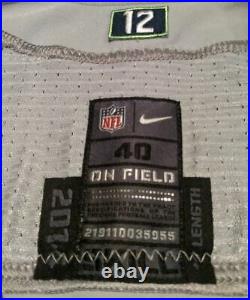 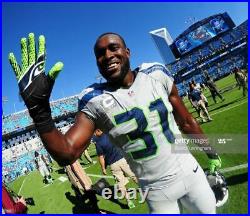 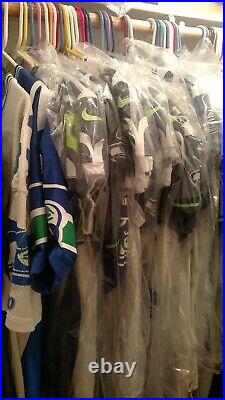 Please read (scroll down) all the way through, including the specific item description as well as the GENERAL TERMS AND DESCRIPTION FOR ALL SALES before purchasing. Finances are forcing me to sell the vast majority of my Seahawks jersey collection. I will be listing them over the next few weeks, starting with the older ones first before listing the newer Nike ones. All of these are player jerseys issued by the Seattle Seahawks. Some saw game use. They come from various sources that Ive bought from over time. They are NOT fan jerseys. They are team issued player jerseys. Feel free to reach out to me with questions about any of the jerseys I have currently listed or will be listing. If you dont see it on the list, then I dont have it. I will try to give as many pictures as possible on individual jerseys so you can assess. If you need another one or two pictures, please reach out to me, and I can probably get you what you need. I have tried to be fair and place these jerseys for sale at a reasonable price that makes sense for both me and for you. But if you feel that you want to make a lower offer and have a reasonable case to make, I have given that option. However, please dont waste your time or mine with lowball offers. This is a team issued (NOT game used) Nike Seattle Seahawks jersey of defensive star and fan favorite, Kam Chancellor from the 2014 season. This jersey is not only a tough wolf gray version, but it also has a captain’s patch as Chancellor was a team captain that year. The definitive Seahawks team jersey tag is sewn into the collar. This is a super tough jersey and difficult to find. A really nice piece that would be a welcome addition to any Seahawks fans jersey collection, especially for people collecting players from the 2013 Super Bowl team. I will be out of town on business from Monday morning 11/2 through late Wednesday evening 11/4. GENERAL TERMS AND DESCRIPTION FOR ALL SALES. For example, you will not see stitched names when player jerseys had printed names or vice versa. These are all jerseys that were issued by the Seattle Seahawks. They are NOT the same quality, cut, labeling, stitching, etc. Some of these jerseys are game worn. If they were game worn, I will indicate that as well as offer photographic evidence of the game use such as repairs or scuffs. If a jersey looks to have been game worn, but its not certain, I will describe that and again offer photographic evidence. Nonetheless, most jerseys never go through the Seahawks Pro Shop, and very few star jerseys are offered to the public that way, but usually find their way into private hands through one means or another. No matter the source of the jersey, genuine Seattle Seahawks jerseys will always have distinguishing features such as proper collar labels, barcodes, material type and quality, etc. All of these jerseys will have a minimum of one such identifier, if not more. In the pre-Nike days (Wilson, Puma, and Reebok), you will occasionally see a player jersey that was issued one or two years before the season it was used in or intended to be used in. And yes, some players do change jersey sizes during the season. Seattle Seahawks Jersey Manufacturers by Year. Team issued jerseys are made for a handful of purposes. They may have seen game wear. They may have been issued as a back-up jersey for a particular game. They may have been back-up stock that never made it to the locker room, and they may even be larger jerseys used for promotional events, including team announcements and signings. You will also see some jerseys that are surprising small. Itula Mili was a 6 foot-4 inch, 250 pound tight end whose 2002 jersey fits pretty snuggly over my 5-11, 180 pound frame. Some players just did not like to be held. I will try to include a Getty photo or another photo from the Internet for the proper season, jersey style, and or game (in a few circumstances). I have to set some kind of reasonable time limit. I will provide you with the tracking info as well. The complete list of what will be listed is below. All jerseys are subject to prior sale. 43 No Name (Tracy Johnson) 1991 White Wilson. Jones 1996 Blue Wilson. 32 Watters 2000 Blue Wilson Seahawks – 25. 89 Mili 2002 Blue Reebok. 57 Orlando Huff 2002 White Reebok. 57 Orlando Huff 2002 Blue Reebok. 59 Tracy White 2003 White Reebok. 75 Locklear 2004 White Reebok. 80 Jerry Rice 2004 Blue Reebok. 71 Jones 2005 Blue Reebok – Super Bowl XL Patch. 23 Trufant 2006 Blue Reebok. 51 Tatupu 2006 White Reebok. 54 Herring 2007 Blue Reebok. 21 Jennings 2007 White Reebok. 8 Hasselbeck 2009 White Reebok. 92 Mebane 2009 Green Reebok. 24 Lynch 2010 White Reebok. 54 Wagner 2012 Gray Nike – HOF 50 Year Patch. 31 Chancellor 2014 Gray Nike – Captain Patch. 92 Mebane 2014 White Nike – Super Bowl XLVIII Patch. 50 KJ Wright White Nike – Super Bowl XLVIII Patch. 50 KJ Wright 2015 White Nike. 56 Avril 2015 White Nike + Blue Pants. 54 Wagner 2015 White Nike – Captain Patch. 54 Wagner 2016 Blue Nike Super Bowl XLIX Patch. 3 Wilson 2018 Blue Nike – Captain Patch & PGA Patch. 89 Baldwin 2018 Blue Nike – PGA Patch. 16 Lockett 2019 White Nike – NFL 100 Patch. The item “Seattle Seahawks Team Issued Kam Chancellor 2014 Nike Jersey Game Worn/Used” is in sale since Friday, October 30, 2020. This item is in the category “Sports Mem, Cards & Fan Shop\Game Used Memorabilia\Football-NFL\Jerseys”. The seller is “vargha” and is located in Fort Worth, Texas. This item can be shipped to United States.