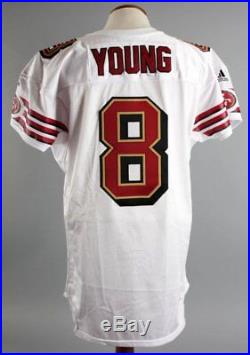 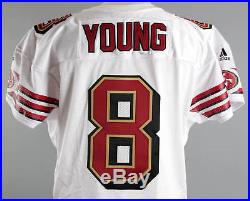 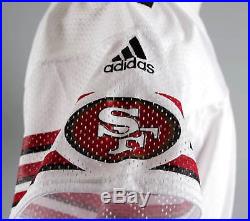 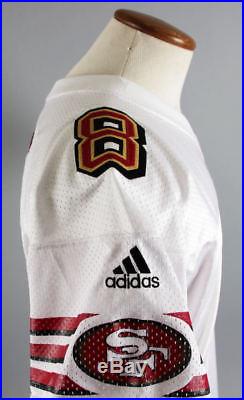 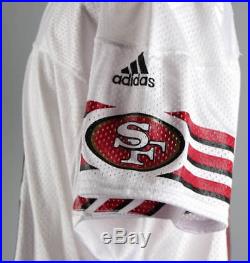 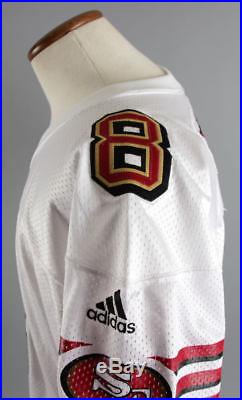 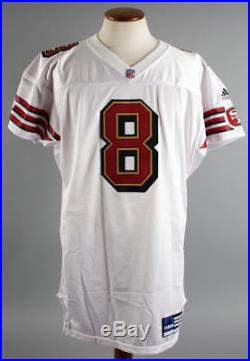 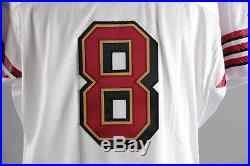 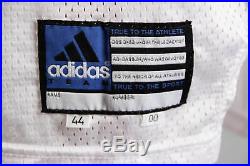 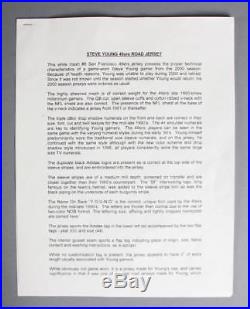 Quality Authentication – Fine Memorabilia. 2000 Steve Young Game-Issued SF 49er’s Jersey – COA. This white mesh #8 San Francisco 49ers jersey possess the proper technical characteristics of a game-worn Steve Young gamer from the 2000 season. Because of health reasons, Young was unable to play during 2000 and retired. Since it was not known until the season started whether Young would return, his 2000 season jerseys were ordered as usual. The highly sheened mesh is of correct weight for the 49ers late 1990’s/new millennium gamers. The QB cut, open sleeve cuffs and cotton ribbed V-neck with the NFL shield are also correct. The presence of the NFL shield at the base of the V-neck indicates a jersey from 1991 or thereafter. The triple color drop shadow numerals on the front and back are correct in their size, font, cut and twill texture for the mid-late 1990’s. The 4+ shoulder numerals are key to identifying Young gamers. The 49ers’ players can be seen in the same game with the varying numeral styles during the early’90’s. Young himself predominantly wore the traditional size sleeve numerals, and on this jersey, he continued with the same style although with the new color scheme and drop shadow style introduced in 1996, all players consistently wore the same large size TV numerals. The duplicate black Adidas logos are present as is correct at the top side of the sleeve stripes, and are embroidered into the jersey. The sleeve stripes are of a medium mill depth, screened on transfer and are closer together than their 1980’s counterpart. The “SF” interlocking logo, long famous on the team’s helmet, was added to the sleeve stripe trim as was the black piping on the underside of each burgundy stripe. The Name On Back “Y-O-U-N-G” is the correct, unique font used by the 49ers during the mid-late 1990’s. The letters are thicker than normal due to the use of two-color NOB format. The lettering size, affixing and tightly cropped nameplate are correct here. The jersey sports the Adidas tag in the lower left tail accompanied by the two flap tags – year (00) and size (44). The interior gusset seam sports a flap tag indicating place of origin, size, fabric content and washing instruction, as is apropo. While no customization tag is present, the jersey appears to have 2? Of extra length usually associated with Young gamers. While obviously not game worn, it is a jersey made for Young’s use, and carries significance in that it was one of the last road jerseys made for Young, which wasn’t used because of Young’s recurring concussion problem. For the Young collector who’s acquired everything but.. Authentication: Lou Lampson LOA. Please contact Customer Suppport if you have any questions. The item “2000 Steve Young Game-Issued SF 49er’s Jersey COA” is in sale since Wednesday, February 14, 2018. This item is in the category “Sports Mem, Cards & Fan Shop\Game Used Memorabilia\Football-NFL\Jerseys”. The seller is “bidami_memorabiliaexpert” and is located in Las Vegas, Nevada. This item can be shipped to United States.