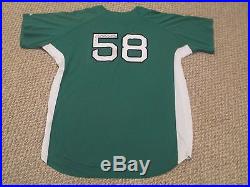 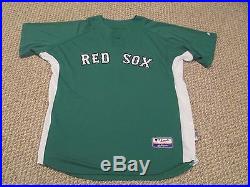 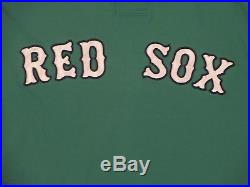 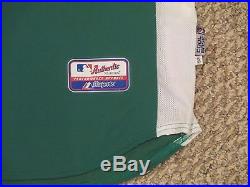 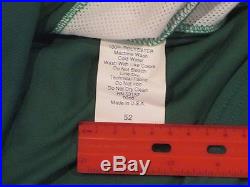 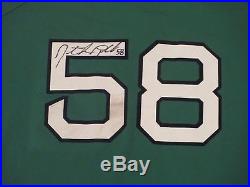 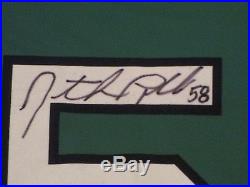 2008 game issued used/worn home jersey that was issued and likely worn by Red Sox closer Jonathan Papelbon on June 20th, 2008. Does not have applied to the Majestic Authentic label on the front. I checked the MLB holgram numbers for this game based on the Lowell jersey holo. And, have not been able to find a hologram for Papelbon. He did not appear in the game, but, was certainly waiting in the bullpen as the Red Sox lost to the Cardinals. 0068 wash tag with a 52 designating the size. This is a discoloring that appears to be dirt on the “5” on the back of the jersey. Rare jersey that is desired by Red Sox AND Celtics collectors alike… Team only wore these jerseys for one game this season. The Red Sox lost to the Cards on this tribute night dedicated to the 2007/2008 Boston Celtics NBA Championship team. Papelbon has applied a wonderful signature with his number 58 to the back of the 5 on the rear of the jersey. The story of the evening is posted at the bottom of this page. Use the shopping cart, or , contact me. Please add me to your favorite sellers… More jerseys will be listed shortly! Honored during a brief pregame ceremony as heavy rain was falling, the NBA champs — atop three duck boats — entered from center-field and circled Fenway to a standing ovation, a shortened scene from their parade through downtown on Thursday. With the Red Sox players wearing green jerseys usually reserved for St. Patrick’s Day during spring training in Florida, the Celtics brought the NBA championship trophies from four seasons to Fenway. The players wore their warmups, with Paul Pierce. Leading their teammates with pumping fists and waves to a crowd as the rain was pouring and the grounds crew was putting the tarp on the field. Also had their grounds crew cut out a shamrock in the center-field grass before the game. After about an hour delay due to the rain, the champions were reintroduced and came running in from center field, with Finals MVP Pierce sliding into the second. Pierce then took the mound to chants of “MVP” before firing a high and hard first pitch that tipped off the glove of leaping catcher Jason Varitek. Coach Doc Rivers then said Play ball! Before the Red Sox took the field for their 5-4 loss to St. Louis, which began after a one-hour, 14-minute delay. On the center-field scoreboard, a brief video tribute was played before they rode out with Queen’s “We are the Champions” playing in the background. The team brought their trophies from this season, 1981,’84 and’86, four of the NBA-leading 17 the franchise has captured. Former Celtics Jo Jo White and Cedrick Maxwell also were in attendance. A few minutes after it was over, a large rainbow was shining in the distance. The item “Signed Papelbon 2008 Game Worn Used Issued Red Sox Jersey Green Celtics SZ 52″ is in sale since Thursday, April 14, 2016. This item is in the category “Sports Mem, Cards & Fan Shop\Game Used Memorabilia\Baseball-MLB\Jerseys”. The seller is “truvalue123″ and is located in River Edge, New Jersey. This item can be shipped to United States, Canada, United Kingdom, Denmark, Romania, Slovakia, Bulgaria, Czech republic, Finland, Hungary, Latvia, Lithuania, Malta, Estonia, Australia, Greece, Portugal, Cyprus, Slovenia, Japan, China, Sweden, South Korea, Indonesia, Taiwan, South africa, Thailand, Belgium, France, Hong Kong, Ireland, Netherlands, Poland, Spain, Italy, Germany, Austria, Russian federation, Israel, Mexico, New Zealand, Philippines, Singapore, Switzerland, Norway, Saudi arabia, Ukraine, United arab emirates, Qatar, Kuwait, Bahrain, Croatia, Malaysia, Brazil, Chile, Colombia, Costa rica, Dominican republic, Panama, Trinidad and tobago, Guatemala, El salvador, Honduras, Jamaica, Antigua and barbuda, Aruba, Belize, Dominica, Grenada, Saint kitts and nevis, Saint lucia, Montserrat, Turks and caicos islands, Barbados, Bangladesh, Bermuda, Brunei darussalam, Bolivia, Ecuador, Egypt, French guiana, Guernsey, Gibraltar, Guadeloupe, Iceland, Jersey, Jordan, Cambodia, Cayman islands, Liechtenstein, Sri lanka, Luxembourg, Monaco, Macao, Martinique, Maldives, Nicaragua, Oman, Peru, Pakistan, Paraguay, Reunion.